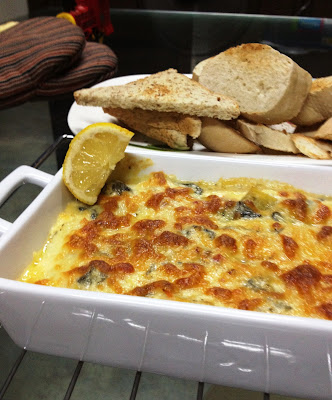 Isn't it wonderful to have pre-prepared food in your fridge, just in time for the rainy days?

Call it coincidence, I have made a lot of it last week and tucked them in the fridge. Just in time when the heavy rain continuously poured down and flooded almost the whole of the metro and some provinces. Some roads were already not passable since late Monday night. Thank God I made it safe from my husband's office. I had to take him there as he has a flight to Cebu for a business trip on Tuesday. I made it home past 11PM at turtle speed. The wipers cannot much fight the strong rain no matter how fast it swishes.

So we live in the east and we were part of Ondoy's history. This time, however, our street was spared from the flood but the entrance to our village and the first streets were flooded, knee-deep.

Since I already made cheesy spinach dip, The next on my "to try" list is to re-create Cyma's Spinach and Artichoke fondue. I have searched for and saved recipes that are close to it or at least can lead me to the right direction and I then just added other ingredients.

Here's what i used:

in a pan, heat oil and saute garlic, put on low heat and pour the sour cream and cream cheese. mix well until texture is soft and creamy. put in spinach, artichoke, sun dried tomatoes, quick melting cheese, parmesan cheese, feta and the chicken cube. add milk or water if its too thick, then salt and pepper to taste (or just pepper if you find it salty already)

assemble the dip on a baking pan, sprinkle with parmesan and mozarella cheese and pop in the oven toaster for about 10 to 12 minutes until top is a bit toasted. (my toaster is at 175C)

Serve hot with toasted bread or pita, also great when drizzled with a bit of lemon juice.


For the past few days, aside from the flood,  it was a busy time for work too (though it has always been busy at work). This has saved me during breaktime and beyond!

Glad that as of yesterday, the rain stopped, the flood gone almost all over. The sun is up and I look forward to sunnier days ahead. Have a great weekend everyone!
Posted by Jammy at Friday, August 10, 2012 2 comments:

It was my friend Sheila who recommended Spinaci Zola and when I tried it, i instantly liked it. I religiously order it whenever we go there.

Last Father's day, we found out that Javie likes it so much, that he did not want to share it with us. Hmph. haha! Well, of course we did not let that happen! ;)

Cibo's Spinaci Zola has Gorgonzola cheese. I would like to recreate the same thing at home, but it hurts to say I do not have any deli store nearby. Here we go with improvisations (or shall we say: maski-paps!).

So here's our home-made spinach dip:

Prepare boiling water. While waiting for the water to boil, wash the spinach, drain and take off the leaves for boiling. Put spinach leaves in the pot of boiling water and allow 2 to 3 minutes to boil. drain well and wait for it to cool.

Chop spinach as fine as you can. You may want to use your electric chopper/food processor.

Pre-heat your oven toaster at 175C

Heat olive oil in a pan, sauté garlic, add the chopped spinach. Give it, say, 2 to 3 minutes to cook with the oil and garlic, then put off the heat, add the cream cheese and 1/2 cup of the grated guick melting cheese. Add salt and pepper to taste. Mix well until everything is incorporated. At this point you may also want to add a glug or 2 of olive oil again.

Then put the mixture on your baking dish, sprinkle with the remaining 1/4 cup of  grated guick melting cheese,and parmesan cheese. Put baking dish into the oven for 10 to 12 mins or until you see the top bubbling and cheese is a bit toasted already.

Best eaten with toasted bread, or like what you see on the photo, I used Fita biscuits (my favorite combination!). The other time I ate it with soda crackers, but it was just so-so!

While it's not anywhere near Cibo's version, I am happy to say that it still is good n' cheesy no to forget healthy! What's important is, Javie really liked it!

Next project: Spinach and Artichoke dip!!! :) 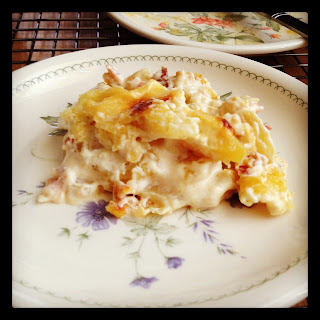 One of the joys of working from home is being able to spend a little more time in the kitchen, even if you barely have a minute left to "log in". I like the adrenaline rush when the pot is boiling  and there goes my alarm saying "hey you gotta go now". Then come the sprinting and running up the stairs to my little office space. :)

We had so much potatoes last weekend. When Archie and I have our market day, he's actually in-charge of the vegetables. Because of too much excitement, he kind of "unintentionally" hoards tomatoes, onions, garlic (which I don't mind by the way because I love garlic!), carrots and potatoes.

The first four are fine as we use them most of the time. Lately, the potatoes aren't used much. I have been watching on my diet for the past couple of months that I veered away from eating starchy foods (and lessened my carb intake and blah blah!)

So with all the potatoes piling up on our veggie tray, I figured they need to be given the attention they deserve! I thought of making mojos, mashed potatoes, sautéed potatoes with rosemary and gratin. I know, potatoes are very versatile! OK, so the debate in my mind (and tummy) went on for a few minutes and the gratin won! Which hubby was so happy about :)

I have no proper recipe for this, nor I followed a classic procedure on how to make a potato gratin.

Here's what I had and what I did:

I boiled the potatoes until they're tender enough but not to the point that they're mushy (I think this took about 30 mins to boil and make them tender) peeled and sliced them in rounds about 1/4 inch thick (I think this is thicker that the usual) and set them aside.

For the creamy cheese sauce and bacon bits, I sautéed the garlic in olive oil and butter, then added the chopped bacon. When bacon was cooked, I poured the cream, about 1/2 cup of grated quick melting cheese and fresh milk, a little salt and pepper to taste.

To assemble, I placed the first layer of the sliced potatoes on the buttered pan, poured some the sauce, just enough to cover the layer, sprinkled some grated cheese, then onto the next layer and so on. For this batch I had 3 layers. For the final topping, I used a combination of quick melting cheese (what's left of it) and mozzarella cheese. (I forgot I had Parmesan cheese. totally!)

I placed the pan in the oven for 35 to 40 minutes, rotating pan halfway through until the top was already a bit toasted and cream is bubbling. I placed the pan on the cooling rack and waited for a few minutes before serving.

So this was what I had for lunch on my busy Tuesday and Archie's "baon" for work! :)

Ahhh, the perks of working from home = the joy of having home cooked meals, served warm with love <3

Days are getting busier and fuller. My little boy will be back to school next week! I didn't forget that it was my blog's 3rd birthday last May 16. Belated happy birthday bloggy! I so wanted to write a birthday post but that day was packed, as well as the following day! So better late than never! ;)

Yumyums for the tum-tum etcetera!

Jammy
A wife and mommy 24/7... a chef in her wildest dreams who simply just loves to cook, bake and eat whatever's in the fridge, pantry... or the nearest sari-sari store.

Thanks for dropping by! I'd love to hear from you!